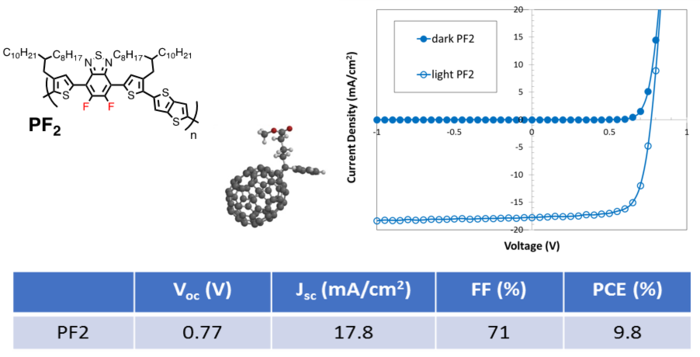 Study ternary mixtures in the active layer to increase the photovoltaic conversion efficiency and/or device stability. Starting from PF2, conversion efficiencies greater than 12% were obtained using two electron-donor polymers (PF2 and J71) and a non-fullerene derived electron acceptor (Y6) of complementary absorption spectra. Using one electron donor polymer (PF2) and two acceptors (PC71BM and EH-IDTBR), good light stability was observed. Better understanding of the influence of ternary mixtures in terms of solid state structure and boundary electron level tuning is a lock that needs to be lifted to jointly achieve high yields and sufficient stability.

Figure 3: Structure of PF2, PC71BM and EH-IDTBR (left), stability of conversion efficiency as a function of illumination time (right).

Dynamics of excitons and charge carriers


In this context, we are studying families of organic molecules with different side chains and heat treatment conditions, allowing us to obtain molecular structures and various crystalline orders (liquid crystal, needles or crystalline grains...). We are thus studying the influence of molecular organization and self-assembly on the dynamics of excitons in order to improve the performance of OPV devices.

Downshifting and downconversion for solar cells

Increasing the conversion efficiency requires the complete use of the solar spectrum by the conversion layer. One of the possible solutions is impurity cells or intermediate band cells, in which a modification of the active part of the cell is necessary. Another original idea consists in the modification of the incident spectrum by energy conversion of its photons, either by downshifting (DS, one UV photon is converted into one visible or near-infrared photon), down-conversion (DC, one UV photon is converted into two visible or near-infrared photons) or upconversion (UC, two infrared photons are converted into one visible photon).
We investigate several downshifting and downconversion systems, either in the form of bulk, oxide thin films, and polymers functionalized with coordination complexes.
So far, an increase of 0.8 points in the efficiency of CIGS solar cells has been demonstrated by ICube, IPHC and IPVF thanks to the downshifting concept (example from 13.5 to 14.3 % conversion efficiency).

Figure 5: Impact of the Eu(tta)3(tppo)2 complex in an EVA polymer on CIGS solar cells.

Inorganic photovoltaic thin film technologies are mainly based on CdTe, amorphous Si and CuInxGa1-xSe2 (CIGS). A major recent breakthrough was obtained with hybrid perovskite solar cells, with conversion efficiencies higher than 20% using a very small area but not stabilized. Another possible path is the use of metal oxides based on abundant elements, that are generally stable and non-toxic. We use pulsed laser deposition (PLD) to investigate novel oxide absorbers for solar cells.
The oxides investigated must have a rather low bandgap to match the solar spectrum. The oxides investigated are LaVO3, Cu2O, KBiFe2O5, h-TbMnO3 and Bi2FeCrO6. For the latter, ferroelectricity is established and plays an important role in the photovoltaic properties. Ferroelectric materials are under intense scrutiny for photovoltaic applications, following the demonstration of above 8% conversion efficiency in FE-based solar cells. In these cells, there is no need for a p-n junction because the electric polarization from ferroelectricity is responsible for the charge separation.

Common forms of elemental silicon (mono-, multi-crystalline and amorphous) play a foundational role in the field of electronics and the underlying technologies are well mastered. A promising alternative is based on an allotrope of silicon: silicon clathrates. They are similar to carbon fullerenes as they form hollow spheres. ICube is one of the few laboratories that can elaborate such material in the form of films. The electronic and optical properties of some of these clathrates are strongly different to the “standard” silicon as they can provide a direct bandgap, paving the way for novel applications in electronics and optoelectronics. Applications in sodium-ion batteries are also emerging. Not only the size of the clathrates but also the presence of doping atoms can dramatically modify their properties. Ion implantation available at ICube is used to modify the properties of the clathrates. 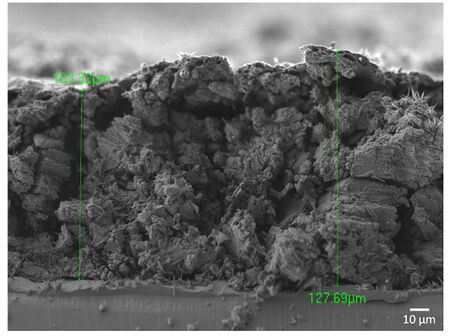